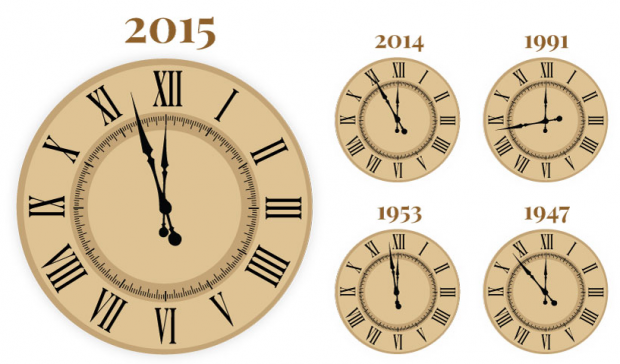 The Doomsday Clock is really a Relativistic Time Minifabrication System Restore for the Universe.

By referencing time minifabrication shenanigans, we must look to accelerated Pocket Universes (Rapidly Expanding or contracting bubbles [or more generally, topologies] in space, with unusual physical properties and laws) as an example. The system restore element comes into play if you are willing to refactor all the elements of a universe based upon preexisting conditions, as an analogue to video game save files, when it has been observed that disaster is imminent.

The time in these fabricated pocket universes may pass faster or slower than our own surroundings’ time due to the principles discovered in the Michelson-Morley Experiment and Einstein’s Special Relativity Gedanken (i.e. gravitational acceleration generates time dilation). That is to say, if the pocket universe is smaller than our own, time passes faster, and if the pocket universe is bigger than our own, time passes slower. This leaves a temporal differentiation between the observer and the observed, whereby all other variables are held constant. As a result, identical results are produced in each universe, but at different rates of time. Ultimately, the system is capable of notifying the observer of their own doom, so as to avoid it. Many worlds. All in union. All in death. All saved.