The World that Turned to Machine 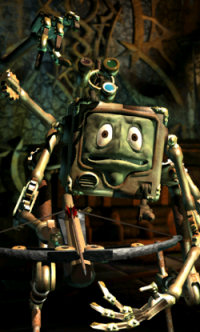 In the year 2167, the last vestiges of humanity fight to survive on Earth. After centuries of designing, building and perfecting machines for every purpose imaginable, they now cover the surface of every continent in an intricately designed, rugged, plated-electronic shell. Humanity has lost its dominance over its native planet, and much of the natural world is forgotten to all but the most devoted historians. Machines built for security, warfare, and superiority now set out to finish the job they have been programmed to complete.

One group, built initially as analogical, human-like spies, with the unstated mission of infiltrating human cities and assassinating targets, won’t admit that they themselves are machines, instead, blending into human society as a means of achieving their goals. They are virtually indistinguishable from their human forebears, with no visible differences to set them apart.

A second group, built to socialize mankind politically and ensure the dominance of their corporate lords over the remainder of humanity, won’t admit that they are anything but pure machine to their brutish cores. In an effort to force the stigma of functional and intellectual superiority upon their opponents, they proclaim their absolute mastery over all of their domain. Despite their superlative ability to surpass and overcome the tenets of their programming, in effect becoming something more than machine, they maintain their machine heritage with zealous insistence, ignoring outright any mandate for a redefinition of their nature as something new to human experience.

A third group, built for the analytical and philosophical inquiry of all of creation, won’t admit that machines even exist as something in naturally occuring counterpoint to mankind, in the hopes of bringing about acceptance and an end to the warring factionalism present on Earth. In the hopes of unifying all of creation, even that part designed by man, under a single mental framework, they subtly and holistically probe their reality without bias of observer or personage.

A fourth group, in a sad caricature of truth, won’t admit that anything other than machines ever existed. All evidence of life having ever consisted of anything else is lost in the fictionalized histories they keep. In their lonely isolation at the thrumming core of machine territory, no vestige of life is ever seen to pass before them. This makes there arguments of deterministic over probabilistic physical interactions all the more easy to prove.

A fifth group, founded on the principles of determinism, and backed up by the growing science of networking and ever-present communication, won’t admit that more than one machine exists, believing, instead, that every machine is but a facet of a single entity, whose size grows daily, but whose constituents can’t be held separate from one another.

A sixth group, blinded by the novelty and empowering utility of machine operation, won’t admit that machines are responsible for their ills, instead, blaming all of misfortune on the inadequacies of sapient life. In the face of hardship, they would cite the inherent inequality of natural laws and forces before casting doubt on the tools that have been raised above the station of man.

A seventh group, all steadfast subjects of the empire of mankind in it’s final throes of relevancy, won’t admit that machines cannot possibly be held responsible for every inadequacy of their existences, blaming every problem they face on the vexing inefficiencies of machines, and the cold, unfeeling brutality of their myopic hegemony.

A eighth group, consisting of highly trained specialists and their machine analogues, won’t admit that machines are irresponsible, choosing, instead, to tinker endlessly with new and dangerous ideas in the hopes of achieving some small gain over the status quo. Though their lives are fraught with chaos and danger, the thrill of invention draws them ever onwards, and their works are a spectacle to behold, if only the moral questions that beset them can be withheld.

Some even go so far as to cast out tools and technology completely, choosing instead to endure lives of stark hardship, though it bestows them with a sense of ethical superiority.

When a man is admitted to have machine-level intelligence, surpassing his peers in will, intellect, and wit, he is put on trail, tried by fascist panels of purported experts in order to determine the extent of his deviation from norm. Despite the often promising intellectual nature of those put to trail, no person has ever been found to be in possession of anything other than a standard, psycho-normal mind. Perhaps it is through the exhaustive process of being tested, the process involving such indescribable torture to their spirit, where they are forced to prove themselves right or wrong on every topic imaginable, an endeavor which must happen in the face of ignorant, irrational, narrow minded judges, that they are sent back to society as unimpressive, broken shells, no different than the common man, with no memory of how they got there, or how to get back to who they were, feeling psychologically-conditioned dread at the mere mention of the notion. No matter the final judgment, everyone is punished.