The Story Of The Grumpy Fish 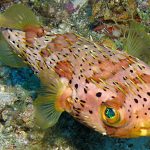 Once upon a time, there was a fish who hated the sea.

Everywhere he looked, all he SAW was sea.

He did not like the sea, but it is all that he saw.

The sea was so big, it didn’t hear him, and the fish didn’t get anything done for a long time. If the sea doesn’t listen, then it never gets better. Eventually, everything was shitty to the grumpy fish.

The fish lived a long time all by himself, because he said, “I don’t like you.”

The fish eventually learned all sorts of amazing and wonderful things by himself.

When the fish grew old, all the other fish thought he was strong and smart and wonderous. The sea liked the fish!

Now that the fish was famous, the sea listened!

It heard all the wonderful things he discovered, but the sea did not like that the fish didn’t like the sea back.

The sea said, “Fine! I don’t like you too!” and the fish died from everything attacking him at once.

Next: The Menu At Chateaux Hamad »
« Previous: Deaths In The Halls Of “Higher” Education