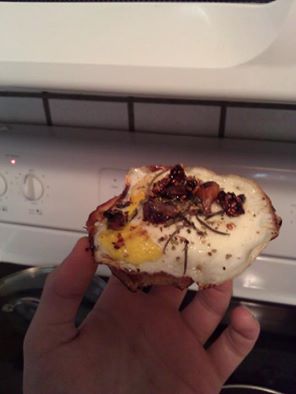 The shallot is pressed with a rolling pin, dropped in the pan, drizzled with honey, and sprinkled with sesame. Tasted figgy.

You prefer sweetb
reads to figs, or figs to sweetbreads? It can be had both ways, you know. Alex fancies them, you see, but there’s not much isn’t by doting fellows such as we.

Yet, if a thing has origin in manufacture, it is, more often than not, derived from much LARGER, LIVING things, and only in manufacturing process might it be broken down into chemistry components such as powders of dusted flavors and innumerable freezedried, heat dried, and rehydratable ingredients, flasks of flavored liquids, oozes, and gels aplenty to provide moisture, and ingots of solid matter that can be carved, fashoined, mixed, and coated in many a form, so as to be contraptualized into something freaky yet edible.

The latest craze in food idiocy (who even cares what’s “good” or “bad” for me, any more, after seeing what’s commonly offered as food in this community) :

Next: I’ll Just See Myself Out »
« Previous: The Art of The Videogame of War