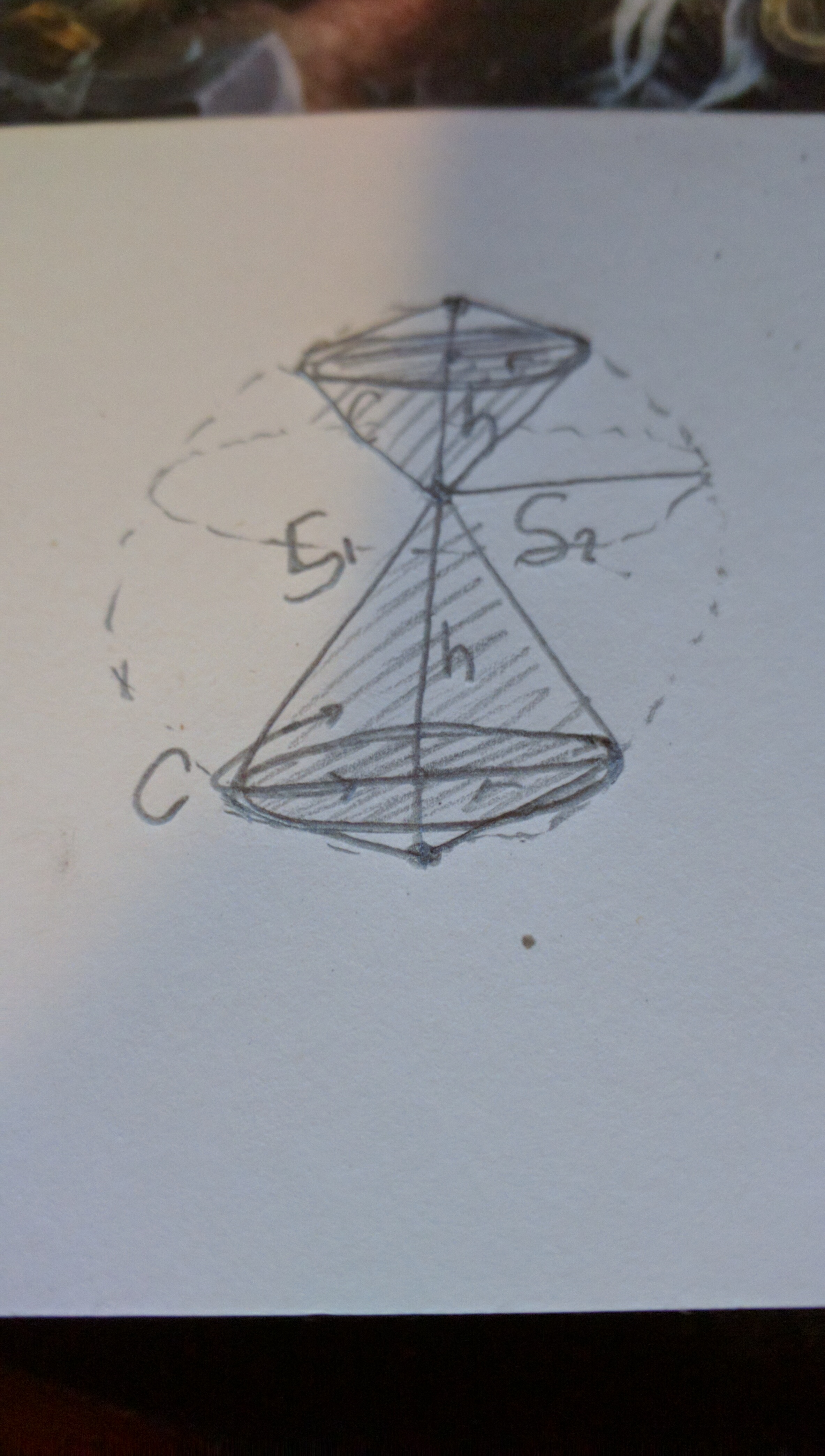 Build a cone with the radius of of a single rod of arbitrary length and thickness, rotated 360 degrees, or 2 pi, if you don’t want to have to draw a 360 sided polygon of 360 triangles. Use coagulant extruded from the tips of the rod to make a line-thickness circular base. Two rods in an angle shape, or four rods in a cross shape could get the job done quicker, at risk of introducing chaos into the system from inexactness and complexity.

Surround the circle of coagulant created by the metal rod(s) circumference in a solid, metal coat, and then remove the coagulant, to get a toroidal shell. The coagulant can be extracted by drilling a hole in the metal, or leaving a hole when the sheathe is cast. Now, apply many rods of the same length and thickness as the original to the edge of the toroidal shell at a 60 degree angle all along the circumference, to define a cone in space. The cone will include a single point where all of the rods meet, a quadrilateral/trilateral cusp plane composed of the combined surface of the rods, and the previously-constructed toroidal shell. Coagulate and coat, then remove coagulant.

Use two cones affixed point to point, symetrically, and a 1/4 rotation of the total surface area of the sphere’s shell, followed by a reverse rotation of the remaining 1/4 ((1/4 rotation)x(2 passes)x(2 cones)) to generate a sphere more quickly. Extrapolating upwards, we find that 4 cones are even more quick, and 6 cones are quicker still, if arranged with maximum symmetry (like electron clouds around an atomic nucleus), at risk of introducing erratic properties into the system through chaos in the grain of the physical structure by using more components.
“K.eep
I.t
S.imple,

S.tupid,”
engineers claim, so as to avoid undue complication.

“Quality AND Performance,” is mandated by computer scientists, who work with ideals and perfect algorithmic forms; so maybe, try using printing-bit objects polygons with more sides, such as cubes, dodecahedrons, and so on, instead of cones. More math makes for more work initially, longer printing times, and more massive constructs, but the spherical shell will be more perfectly spherical the more sides there are on the polygonal bit used to print a sphere.

Applicable to 4-dimentional “light cones” from Stephen Hawking‘s “A Brief History of Time”. I hypothesize interaction spheres, which the light cones are a lower-dimentional representation of. I am also seeing projections in post-drawing animations that are somehow being piped to my screen of things called, “Interaction Cylinders.” Interaction cylinders are an outpouring of line and ray rope maneuvering and mass reproduction calculation. They aren’t ideal. A more liberal use of my skillset would advise to use something to magnetically and variably counteract the cone’s weight, so as to levitate and subsequently spin the cone.

Technologically approximate to either a magnetically levitating rim-printing top, or a “zero gravity” top. You laugh, you lose.

Next: Fuck You, Buddy »
« Previous: Take Heed, Wild-Eyed Child of the Sun