I Hunt at Night 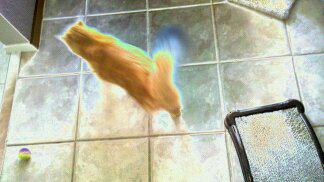 My cats’ colorations are indicative of thier diet and condition. What hunts them, what they hunt, and what they both attract and repel.

Saffron is red like the mudclay desert. Fed on whatever scorpions and lizards and roaches and creatures reside there. Her body is long and sinuous and lanky, to avoid touch, and gyrate away from anything that might approach her. Her tail often hammers the ground to imitate rattlesnakes on surfaces slighly behind and above her, to bait and lure and tire other animals as they approach from behind, and weaken her prey before she attacks it from the side. She creaks and shrieks with shattering tones when being forward, and winds her scent through shady, depressing branches and stems to confuse her trail when being followed. She loves hiding by the shed, where the dark marooned tones and yellowed dirt make her relative weakness in coloration stand out to her supper. She smells like delicate musk and mimics scents she has recently come into contact with.

Andy is grey and green with black and gray stripes and morphous white blobs, with confusingly attractive tan blotches on his lips. Far too much white colors his fur to hunt away from white bedrock and river rock jumbles and scrubby mounds of exposed, white limestone. He is slightly angry when climbing trees because he stands out from his surroundings when viewed from above, except to birds and predators looking down from above near the terminal nodes of branches. He is a diminutive, vexing harrier, who always runs away to the narrowest end of the trail and inclinates himself upwards on his plane, where he can get at his intended meal by by sucking and hissing at animals descending towards him when they are attracted to his mouth by the brown blotch near his lip. His fur is glossy and slick and his legs strong and grippy with hooks on the elbows to climb and scale and grab hold of mildewed rocks and dappled surfaces. He avoids the songs of whistling I perform for him unless he has not heard the hem (attention) and had (strength) in them before, at which point he investigates, indicating that he moves on from that which is known into increasingly turbulent waters and works to distance his presence from animals he lives with and already knows about, by seeking increasingly novel creatures to play with, so as to avoid observation of his strategies. He really hates hal (resolution).

Amos is furry tan and light brown and black and white snow footed, possibly acclimated to shorelines and permafrost and avoiding notice from coastal animals while standing in dark brush and torn grass and loam, attracting light-seeking insects, snails, crabs, worms, mosses, mice, clams, and other coastal creatures to where his feet are, where they can be crushed by his solid weight. His fur is oily and rich and his legs are tall to keep himself clear of the ground. He is a silent hunter and prefers to keep to himself with angry, furrowed looks when approached from his high-perched resting places on the sides of the v-shaped creeks he inhabits.

Theodore is white, with growing blotches of gray. He hunts on pavement and concrete, with beady red/blue eyes, where the blotches can impress the recollection of oil and ash and poison upon his surroundings and his eyes can attract attention and food to his face. He has a forceful and sticky and jammy personality, and oppresses his prey into a corner with distaste before eating it from underneath, away from the head when it grows weary and falls asleep. He sidles around the exposed concrete foundation on the side of the house to creep along the driveway and the sidewalk and look for food near cars and pedestrians.

Big Guy and Fluffy were natural city hunters. Dark grey and well-fed, willing and able to walk accross the worn street and stalk in the elm trees, and proud to hunt for me and bring in squirrels and birds and nurse the kittens and soak up attention and warmth. Never wanting for anything in the way of prey, as they were fed by people, their coloration mimicked the color of paved road, in order to avoid notice from owls when strolling up and down the street to the many houses they visited.Their temperament was placid and austere, and their haughty looks belied their domesticity.

Thorn was caked with violence and filth and dark brown mud, and tangled and matted with flaps of hairy mud and burrs to keep things from approaching his interior where he might be hurt. Not even caring to feign interest in human companionship, he ate and hurried off to explore the outdoors. He hunted black, tunneling insects with a vengeance and was seen to mount Big Guy, in an attempt to push him through his brown mulch turf and into the creek bed.

I hunt at night, with my body masked in black hair. I hate yellow fuzz pokey raspberries and skinkysharp green apples and adore sweet cheeses and milks and green vegetables and goatsflesh fried in fats and warm rice and honey and peppercorns and chocolate and ripe bulging sweetened purple plums and teen (date palm) and grain. I feign interest in processed foods unless they are prepared hot and wet enough to ensure they are compensatory with the lack of nearby growth. I often don’t wait for my food to cool before eating it. My feet are playful and soft, and my toes grab and roll small objects and pull them nearer until I am strong enough to stand and  pull them behind me or lift them to my hands or behind my back. My eyes are brown and honeyed, to attract small, nut-eating mammals to my raised mouth, where I snap them with a strong jaw and a lowered sideways whip of my neck and chin, before swallowing them whole. If they are followed closely by some other animal, in the event that my jaws miss, my hair is wavy and curled and tangled, and confuses large and small predators and flocking followers into thinking I am larger than I am, so they might get lost in the tangles of my hair. At times, I lie in wait on my back with a clenched fist and tensed legs, to beat large animals that approach me at night looking to make a meal of me, as I twist to bludgeon them from behind. I imitate animals calls to lure them closer, and naturally suspect anything new of deceit, as I expect them to do the same to me. I interact with my environment as little as possible when approaching a new place, so as to hide my ability to win, and maintain a constant expectation of violence against myself and other people, to avoid notice and attention from other creatures who might follow me into my territory before I have them surrounded by my pack. I wait for moments of vulnerability and conserve my strength until I attack. If I am held by an enemy clan and forced to work for nothing, I starve and die until I can drag them down enough to fight back if their numbers outmatch my own. I pick apart any object that hurts me unconditionally until it is safe to continue, including what restrains me. If something is dangerous enough to kill and trap and suck at me or my mated crew indiscriminately of my desire to cooperate, without making it’s presence known, I trap it and tear apart it’s protection until it is exposed, or coax it with affection or wealth to assist me, until it submits. If it doesn’t, I get angry. I get very little assistance that I am closely aware of. I enjoy skulking walks in the mid-afternoon sun on the local campus grounds, where the white, billowing clouds make me invisible to the behemoths above me on the pallid blue icerock, and where I blend in with the orange-red-yellow cobbled pathways left there by those who carried the dead and buried above ground. While there, my skin grows darker from the sunlight and my inky hairs melt in as I walk alongside the sharpened out black bushes and cobbled sidewalks. My hair protects me from being seen by what is above the blackness you call space at night. I urinate on light green and yellowy inedible patches of grassdirt to kill them away from me so they rot and bubble into pale dirt and rich, warm, delicious bakepool, attracting the insects and game that I hunt, and I defecate in the same place repeatedly until the color mixes in with the white rock enough to match my skin, that I may hide in secret and continue in surviving.

Next: Bubble, Bubble, Toil and Trouble »
« Previous: A Close Shave