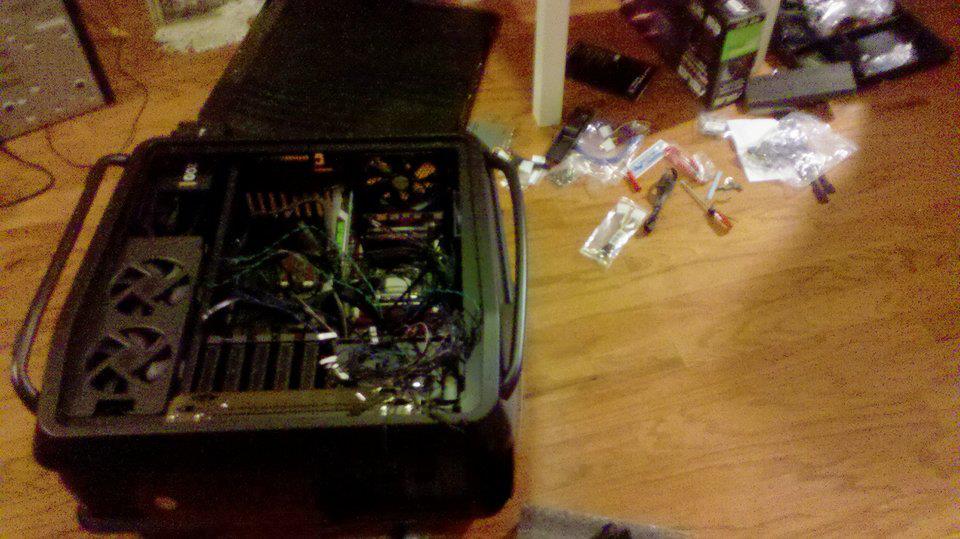 Cyrus laid the parts upon the table before him. Amongst them were slick, angular shapes, rounded, gleaming pipes, and fans that gyrated seductively when pushed. The table’s surface rattled as the pieces were set down, from the tiny thumbscrews to the parts they held in place with bolts and washers.

One by one, he lifted the jumbled contrivances and bolted them to the steadily growing assemblage that teetered before him.

Slowly, and with muttered curses, Cyrus realized that he would be taking more time than he had initially planned for; part of the contraption had been affixed backwards. Fearing the collapse of his fragile mental state more than that of the pile in front of him, he decided to take some time out to smoke, so that he might cool his frayed nerves. With a quick break, things would surely go more smoothly, he thought to himself. The opportunity to succumb to distraction would also give him time to decide what to do about Rebecca.

It had been almost a week since he last spoke to her, but the threads of his youth that tied him and drew him closer to his lovers had stretched themselves thin to ineffectually loose bands, and now, in maturity, he felt only the slightest of tugs upon his psyche, beckoning him to seek her out for companionship.

Amongst other failings, this disappointed him, but, as he often found himself doing of late, he reminded himself to hold tightly to the here and now, lest he voyage overmuch on the waves of thought and self-doubt that beset him and lose himself in the sprays of emotion.

As the last clump of ash fell into the bowl resting beside him, he set back upon the parts before him. The phone rang almost immediately as he sat down. Standing, he extracted it from tight jeans and answered,

“It’s me, Cyrus,” buzzed the speaker in muffled tones. “Just calling to see what you’ll be doing later.”

Marveling only briefly, in fact, perhaps too briefly, at the astounding coincidence of Rebecca having called at the very moment he thought of her, he gave his reply.

“Hey, Rebecca! I’m just working on some revisions to my project.”

“Good to hear!” she responded cheerfully, adding, “If you’re not headed anywhere I can stop by later.”

“Sure thing,” he said gratefully, before the two said their goodbyes.

He turned back anxiously to finish the remainder of his tinkering.

With any luck, the changes he was making to the foundational routing unit of his negative-T transmission node would fix the problems with the receiver’s synching characteristics. By placing a few resistors and capacitors further along the circuit instead of wedging them in next the wave handler, he expected the messages he was pulling in from tomorrow’s data drop would be easier on the nerves.

He thought to himself about the final outcome of his work as he finished screwing in the last panel, and found his mind filled with dread at the prospect of turning on the device. Toying with the future by peeking across the threshold of the present could often prove to be unsettling. The branching mechanics of the now into then wound through all of the potential existences and futures that might come to pass, and while he couldn’t easily predict them and store the possibilities for use, due to the infinite ways in which events might play out, he often found that, at the least, he could make a big change here or there that would ensure a good outcome.

Rebecca’s regular and tumultuous visits didn’t fit well into his diligent planning. She rocked his peaceful and reserved inhibitions with tumult and calamity, and the intrigue and raucous feelings she brought out in him left him reeling after ever visit. Though it would make his life easier, he refused to use the device on her.

Just then, the doorbell rang. Cyrus padded across the stained concrete floor of his live-in laboratory in his socks, feeling a moment of pleasure as he walked across a plush carpet to answer the door. Things had been lining up pretty evenly, he thought to himself. One task flowed seamlessly into the next. There was an entire team of eigentemp scientists hinging on the successful operation and maintenance of his very expensive leased hardware, and he often wondered if their artificially intelligent control software had anything to do with the serendipity of his life.

Rebecca flashed a toothy grin and hugged him playfully as he opened to door to greet her, and he waved to her, closing the door behind her, before turning back around to hurriedly switch on the power to his backup unit. He felt a pang of guilt at continuing to work, but it gave his hands something to do as he navigated the rush of emotion. The resonance cascade that he’d suffered when the cooling on his hardware had failed 14 months ago had left his manners, as well as his intellect, he often felt, somewhat wanting, although no one seemed to agree, or even care, about his harsh self-assessment. Even the doctors he had visited said they could find nothing wrong. They had offered mood stabilizers and antipsychotics, but he had refused, not wanting to dull sensations of every kind in himself. With the backup unit providing standby support to his tachyon emitter, his hands moved briskly to wire in the revised unit as he spoke beamingly to Rebecca.

“It’s about time you showed up! You know I can’t be left alone for more than five minutes without screwing something up,” he joked.

She laughed throatily, and moved to stand in front of him as he worked.

“I was beginning to think you had skipped town. This place is the dumps without you,” he chided.

She laughed again, more nervously this time, and replied, “Please, don’t even suggest it. I have too much tying me to this place. Yourself included, mister.”

He stepped away from his desk to stand in front of her.

A longing sigh as Rebecca answered her ringing phone.

“It’s work. I have to go,” she told Cyrus placatingly, before rushing out the door, looking frazzled already.

The door shut behind her, and with it, Cyrus’s hope for comfort. An alert on his cellular phone from his main console startled him out of his despondence.

“Go after her!” he heard screaming from the phone’s speaker, in his own voice.

Cyrus gave a start. The message didn’t conform to the usual format, so he was somewhat confused, but who was he to argue with himself? He walked through the front door to go after her. As he did, his senses began to tumble and thrash.

As he stepped onto the landing, he saw her about to cross the street and called to her. through a blur of buzzing confusion. She turned around to respond, and a car zipped past, closely missing her.

“Fuck,” he whispered under his breath. “That must have been a messy one. Good thing it was evitable.”

He raised his phone to his mouth, pressed the message button, with a 30-second delay to destination, and shouted, “Go after her!” No chances this time. His thumb quivered slightly as he released the button, and reality went mad.

Cyrus experienced that gut-wrenching sensation of walking backwards into himself walking forwards. High-energy particles popped and crackled from every direction. The two ghostly forms, what is and what wouldn’t be, merged in his consciousness, and in the corners of his vision he could barely see the disappearing flash of sirens and lights. The now never-called emergency vehicles unwound from a gruesome spectacle that slowly decomposed into a reality that never took place. That possible future must have been traumatic for him, but the worst had been avoided. Like most of the hardship in his life, it was prevented from ever having happened by the life-saving technology in his possession.

Rebecca crossed the yard to meet him, a worried look on her face, and asked breathily, “Did you…?”

“Yeah…sorry…” he admitted. “I promised not to use it around you, but this was an exception. I rather like having you around,” he explained as she grabbed him tightly for a kiss.

They separated, and he looked firmly into her eyes, and complained, “I need new socks.”

“You need nothing of the sort,” she said decisively, as she took his hand in hers and the two of them walked back to his place.